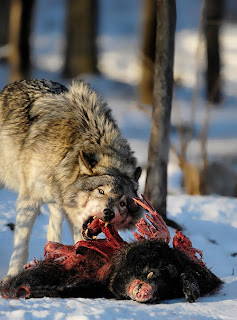 Another week's past us by and most of us are so caught up in the business of day to day that we never stop to give much thought to the natural world around us. So in this weeks time stopper moment I'd like to explore why the wolf has been the focus of such hatred and fear, especially over the last hundred years. I'm willing to bet that if you surveyed 100 people and asked them what the first emotion that comes to mind is when they think of a timber wolf or arctic wolf that 90% of them will say fear.

Is it any wonder. If you're like me you grew up with bedtime stories like, "The Three Little Pigs" and "Little Red Riding Hood" The wolf wasn't exactly portrayed as the good guy in those tales now was he. Since then I've come to appreciate the importance of the wolf in the balance of nature. To me wolf pictures like this one portraying a timber wolf feeding on a wild boar carcass are just normal part of the predator and prey relationship.

I don't want to turn this into a history lesson but did you know that over a million wolves were killed between 1850 - 1900 in North America. And in 1907 there was a call for the total extinction of the wolf. If you're like me, you read that statement and thought to yourself, "humans sure had some crazy thoughts running through their heads back in those days, glad that's all behind us." And as much as I wish that it were all behind us, sadly it is not. Here's a clip from a recent article that gives cause for concern: Full Story

WASHINGTON, D.C., Jan. 8, 2011 — Calling wolf populations out of control in Wyoming, Montana and Idaho, Secretary of the Interior Dan D. Lyons said today the federal government should start paying bounties to hunters and ranchers who shoot wolves. "If a hunter or a rancher misses a wolf more than two or three times, "we'll take that as prima facie evidence that he is intentionally violating the law and letting a wolf continue harming our game animal populations. The fine is $1,000 and 48 hours in jail."

And closer to home here in Canada another headline that supports this rather disturbing trend:

Big Lakes Alberta Wolf Bounty Put an end to this misguided cruelty!!
Problem: Rural Municipality of Big Lakes Alberta began offering a $300 bounty on wolves in September 2010.
In just In 7 months 63 wolves killed and claimed! How Can You Help?
Note the dates on the statements above folks, these are here and now. Truth is the wolf has been part of the natural balance for thousands of years and in less than 100 years man through ignorance and misinformation has brought the species to extinction in many parts of the world. Are there some areas where wolf populations have made a recovery and there is a now a need for balance, absolutely, is the answer a shoot on sight bounty, I think not.

So where do things stand today? There are strong opinions on both sides of this debate ranging from those that share the opinion that the only good wolf is a dead wolf to th 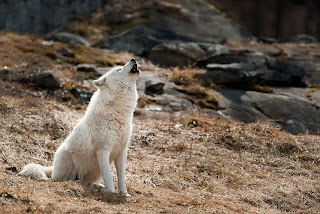 ose on the far right that believe wolves should never be killed for any reason. I for one do not wish to see a wolf killed, but when man and wolf come into conflict usually the wolf will loose so we need to find a balance between these extreme points of view.

It is unfortunate that the wolf through no fault of its own has come into conflict with man, but the reality is that with the ever shrinking wilderness that makes up the habitat of the wolf, if we do not find a middle ground the wolf may once again find itself on the brink of extinction.

Michael and I are hopeful that through our wolf photography at Wolves Only and blog we will raise awareness and rally support for the preservation of sustainable wolf populations and their habitat. We are still deciding which group or coalition to support through our efforts so if anyone has any suggestions we would love to hear from you.

Until next week let's do our part to keep the howl of the wolf a symbol of nature rather then a woeful goodbye.
Posted by Bill Maynard at 01:18