Who's Afraid of "Losing" The Big Bad Wolf

I wanted to take this opportunity to tell you why Michael and I established WolvesOnly.com. It was born of a love of wolf photography pure and simple. As anyone who has had the pleasure of observing a wolf pack can attest there is just some mystical magical thing that draws you to them the moment your eyes connect. That is exactly what happened to me the winter of 2010 when Michael introduced me to the Arctic Wolf pack and Timber Wolf pack that he had been photographing for years. 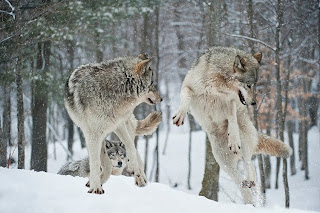 As any wildlife photographer will attest the secret to getting great shots of any species is through a thorough understanding of the behaviors of your subject. This allows you to plan your outings according to the seasons and anticipate those moments that will make for a great photograph before they occur. During my research of the wolf I was deeply disappointed to learn that the future of wolves in many parts of the world, Canada included, looked rather bleak. That brings us to the real reason wolvesonly.com came to life. Up to this point Michael and I had quietly shared a few wolf pictures by email with our friends and posted a few to various sites for general viewing.
That's all changed for us now as we have come to realize we have a tremendous opportunity to use our wolf pics as a means to aiding the conservation efforts of the wolf. I think most would agree there is no greater tragedy in the world then when a species is put in danger at the hands of man and that goes for cute and cuddly seals all the way to top predators like cougars, bears and wolves.
Now just to be clear Michael and I are not hard core activists, far from it, we're just a couple of wildlife photographers who happen to love to photograph wolves. We also share a common belief that it would be catastrophic if in our lifetime the wolf found itself on the brink of extinction and we hadn't done our part to do something about it.
As you are all aware 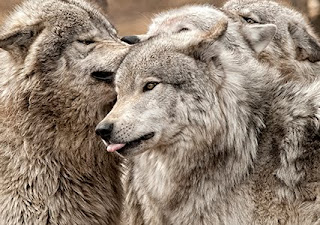 with any cause there are always two extreme camps and one somewhere in the middle that is unaware of the issues. Over the weeks that follow I will be bringing some of those issues to light through this blog and be asking for your aid in our effort to help conserve sustainable wolf populations for future generations to enjoy.
Michael and I will be donating a portion of the proceeds from all sales made through WolvesOnly.com to an organization or charity that supports those conservation efforts. As we have just launched the site these are exciting times for our followers as we really do want and need the help of anyone and everyone who wishes to join the cause.
Call to Action: Michael and I are in the process of determining what organization or charity to support thus we would really appreciate your feedback if you're aware of any standouts as it relates to wolf conservation.
Until next week keep those emails and blog posts coming we'd love to hear your thoughts.
Posted by Bill Maynard at 05:22